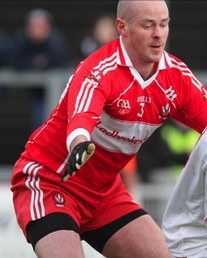 The condition of former Derry GAA senior football captain, Kevin McCloy, who was rushed to hospital after collapsing on the pitch while playing for his club Lavey during the week, is improving, his family have said.

The 35-year-old was revived with the use of a defibrillator after he collapsed 10 minutes into the championship game with Magherafelt at Owenbeg in Dungiven on Wednesday night.

In a statement the family of the former All star said: “Kevin is stable and his condition is continuing to improve, whilst receiving care and attention at Altnagelvin Hospital, where his progress is being monitored.

“Kevin’s wife Cathy and family are very thankful and happy for the care and attention he has been receiving.

“The family is very thankful for those who attended to Kevin on Wednesday night at Owenbeg GAA grounds.

“We would also like to thank all those who have sent good wishes and prayers. At this time the family request that their privacy is respected.”

His club, Lavey, said the news their captain was showing signs of improvement was “welcome news.”

John Keenan, Derry GAA chairperson, John Keenan, paid tribute to those who came to his aid on Wednesday night.

Mr Keenan said:: “The thoughts of Derry GAA, its clubs and players are with Kevin McCloy, his family and all at Lavey GAA.

“We would like to praise the players, match officials and stewards, and the medical teams of both clubs at Owenbeg for their swift actions in attending Kevin.

“In particular, I wish to commend the efforts of the doctors and paramedics present at the ground, and the swift response of the paramedics from Altnagelvin Hospital.”