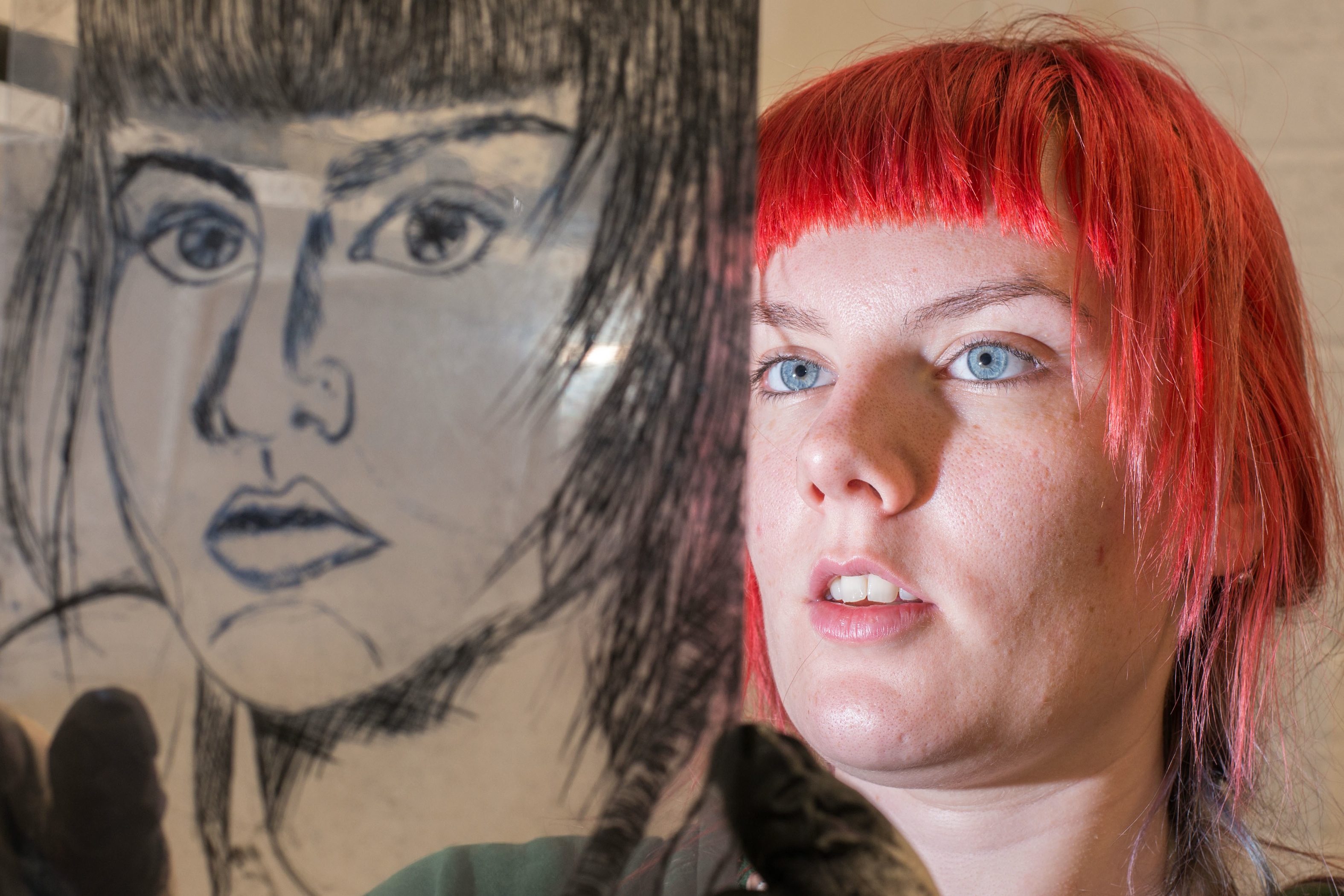 Leeann Toland studies a self portrait before printing as she took part in a Make My Monday- Printing workshop. Picture Martin McKeown. Inpresspics.com.

Derry Print Workshop (DPW) has opened up a whole new world to fine art lovers keen to get their hands dirty in the style of Rembrandt and Picasso, as part of the Legenderry August Craft Month.

The printing workshop introduced participants to ‘Intaglio,’ a traditional form of fine art printmaking practised by artists such as Rembrandt and Picasso where the artist draws into a plate, inks it up and prints using a traditional etching press. The ‘Make My Monday’ participants each produced an original hand printed artwork at the end of the workshop.

Based at Pump Street, DPW is a fine art print workshop with charitable status which was established in 2001 to promote the appreciation and practice of printmaking and other related visual arts.

The project was originally set up by a small group of artists led by Paul Barwise and co-director Andrew Hepburn, as a start-up etching facility with one Hunter Penrose etching press in a small unit.

Paul Barwise explained: “We had set up as a fine art print workshop with charitable status but found the initial years a struggle when trying to meet our aims as an open access facility.

“There was no open access fine art print studio to the west of Northern Ireland and this was something we felt needed to be addressed. UK City of Culture 2013 was the catalyst for developing the workshop into its present form; providing the funding and the vision of like-minded people who could see the value of establishing a well equipped fine art print studio in the city.

“There were the usual jumps and hoops we had to go through but with the financial help and good support from the various groups involved – Ilex, Arts Council NI, The Culture Company, Inner City Trust and Creative Village Arts group – we were able to establish a small but well equipped fine art print facility in the city. “Equipment now includes a Rochat Etching press, a Rochat Albian Relief press and a wide format Epson Stylus Pro digital printer for archival print production. The Creative Village Arts group also accessed funding through the City of Culture initiative, so were able to renovate an old building in the city centre providing studio space for artists and a purpose-built space for our fine art print workshop.

“We opened in June 2013 and our membership is just 10 at present but we predict that it will at least double over the next year with continued interest growing from courses and events run throughout the year. It is an exciting time with genuine support shown from the community and an awakening interest towards the arts in the city.”

Liverpudlian Paul Barwise, a fine artist who moved to Derry 30 years ago after marrying a local girl, believes that Derry can replicate some of the success Liverpool has enjoyed since its tenure as European City of Culture.

He also sees great potential for Derry Print Workshop as a tourist attraction, particularly with ongoing regeneration and the growing “creative atmosphere” in Pump Street and the surrounding area.

DPW is part of a joint print workshop “Images of Ulster Exhibition” that is presently on display at the Strule Arts Centre in Omagh and will be coming to Derry in September to be shown in Altnagelvin Hospital’s exhibition space.