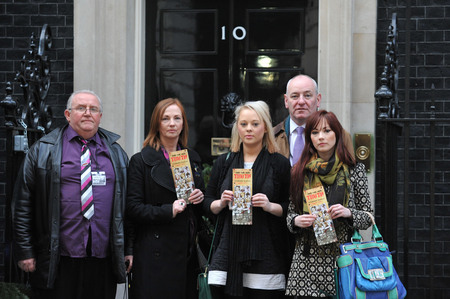 Foyle MP Mark Durkan joining relatives of those killed in the Ballymurphy massacre handing in a petition to 10 Downing Street.

SDLP Foyle MP Mark Durkan has supported a parliamentary motion at Westminster calling for an independent international investigation into the 1971 Ballymurphy Massacre, when 11 people were shot dead by British paratroopers in West Belfast only five months before Bloody Sunday.

Mr Durkan, who has previously secured a Westminster Hall debate into the atrocity, and joined relatives handing in a petition to Downing Street calling for an independent inquiry into the killings, said he was “deeply concerned” by the British Government’s decision not to establish a review panel to assess the evidence relating to the killings.

Mr Durkan said was also “dismayed” the families of the victims continued to be denied justice.

He added: “Just like the Bloody Sunday campaign, the terrible loss of life, the innocence of those killed and the denial of truth makes the Ballymurphy campaign a very important one.

“This campaign deserves to attract the support and attention of everyone.

“All of those shot in Ballymurphy were killed by members of the Parachute Regiment who just five months later murdered innocent people in Derry on Bloody Sunday.

“The victims’ families deserve redress and compassion and the innocence of their loved ones vindicated.

“Indeed, they require an inquiry panel to do that and the SDLP will be pushing the government to listen and pay heed to their pleas.

“We will therefore be calling on the government to issue a statement of innocence, to issue an apology to the families, and to deliver an independent international investigation (modelled on the Hillsborough Independent Panel) examining the circumstances surrounding these deaths.”