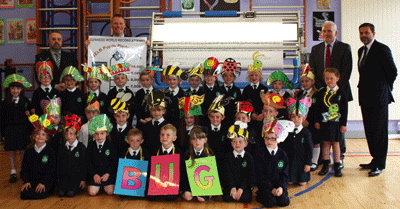 St Patrick’s Primary School, Pennyburn, is the first school in the Derry City Council area to sign up to the Guinness World Record attempt, “Most Signatures on a Scroll” Pupils’ Peace Pledge initiative, organiser by local cleric, the Rev David Latimer.

Eight hundred and forty pupils from the Pennyburn School personally pledged peace by signing their name on a fabric scroll mounted onto a customised stand  donated by Hunter Apparel Solutions, Springtown.

The machine is trimmed in a branded skirt especially designed and produced for the initiative by Cunningham Covers, Maghera.

The initiative was launched last month by Rev Latimer, who was one of the first signatures on the scroll, alongside Nobel Peace Laureate John Hume, US Civil Rights Veteran John Lewis and Western Education and Library Board (WELB) Head of Children and Young People’s Services, Philomena McDermott.

Rev Latimer said he was “delighted” with the response from schools and pupils.

He added: “We must continue along the path of peace so that young people from the area will be empowered to share their vision of how we can all learn to live better together.”

The preparation for the roll out had the support of the Western Education and Library Board (WELB), assisted by Desmond Motors, Strand Road, who sponsored a vehicle to transport the fabric rolling machine to each primary school in Derry City Council area and to 10 primary schools in Co. Donegal.

Adding his support, WELB Chief Executive, Barry Mulholland, said the Board was delighted children and young people from schools throughout the WELB area were “embracing” the “Pupils’ Peace Pledge” initiative.

He added: “Following on from Rev Latimer’s ‘Pathway to Peace’ project, young people have been given the opportunity to inscribe their vision for peace on a Guinness World Record Scroll highlighting the importance of youth participation in peace building and the positive effects received by the wider community and beyond.”