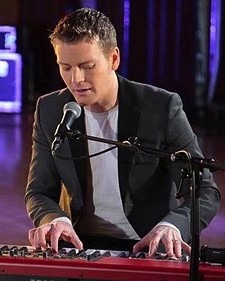 Derry football fans will get a unique opportunity to quiz one of the best known faces in the sport when Guillem Balague appears alongside one of the city’s most talented musicians in Bennigan’s Bar, John Street, tonight.

Award-winning journalist and best-selling author Balaque, best known as a regular pundit on Sky Sports, will host a question-and-answer session ahead of a live appearance by Best Boy Grip – Derry musician and producer Eoin O’Callaghan.

Tonight’s event, which has sold out, is a celebration of the Spaniard’s new musical career.

The pair teamed up after Eoin replied to the Spaniard’s request to his 400,000 followers when looking for musicians to bring his written lyrics to life in the form on an EP which will be released within the coming months.

“Someone had told me that Guillem had basically sent out an invitation on his twitter looking for musicians to send material to him in hope of finding someone to begin a project with,” Eoin explained. “I decided to send some of my work to him and it wasn’t until a few weeks later when I received word back from Guillem himself. He seemed to love my stuff and he was
really complimentary and humble about the whole thing.

“That was interesting because he seemed really excited and respectful but the feeling was mutual of course. He seemed delighted to have found someone that could help turn the lyrics he had written into something tangible and I was more than happy to go with it considering how talented he is as an author.”

The pair will be appearing at a number of events to promote the impending EP, including an event being staged this September in The Cavern, the legendary Liverpool club made famous by The Beatles.

As a sports journalist, Balaque – regarded as “an authority” on Spanish football – has been responsible for breaking some of the biggest news in the game in recent years, including the transfers of Torres to Chelsea, Ronaldo to Real Madrid and, most recently, Juan Mata’s move to Manchester United.

His biographies include “Messi,” the history of the man regarded by many as the greatest footballer in the world, “Pep Guardiola: Another Way of Winning” and “A Season on the Brink,” a look at Rafael Benitez’s time as manager at Liverpool.