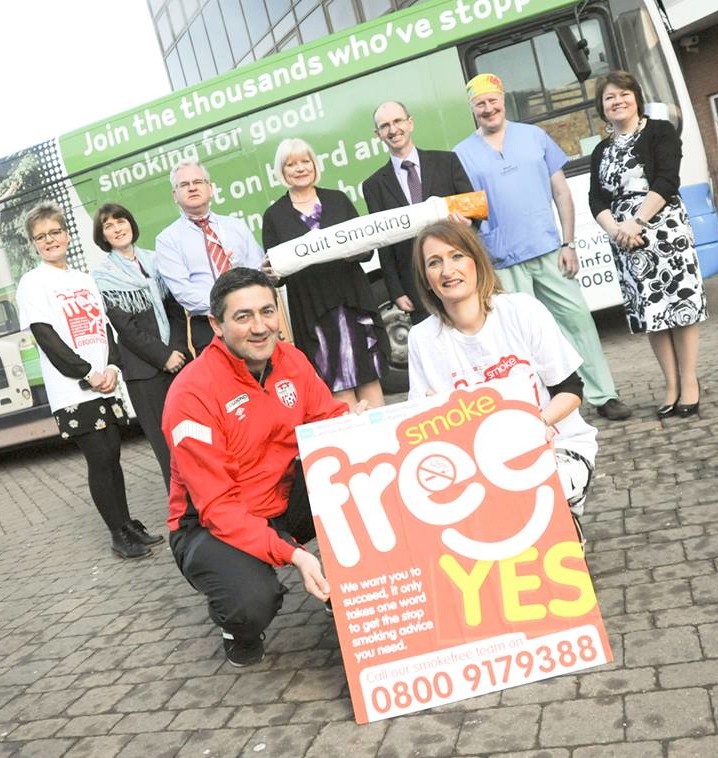 The smoking ban introduced yesterday by the Western Health Trust has got the backing of Derry City assistant manager, Peter Hutton.

The former City captain was at Altnagelvin Hospital in Derry for yesterday’s launch which sees smoking “stubbed out” all of the Trust’s sites including acute hospitals and community settings.

It is the first Health and Social Care Trust to implement this ban in Northern Ireland.

The ban means smoking is not permitted anywhere on its grounds or premises.

Smoking is not allowed on site for patients, service users, staff, members of the public and contracted workers.

This is a step further than the previous policy as now there is no shelter where patients can smoke and staff are not allowed to smoke in their cars on site. Smoking areas such as the smoking shelter at Altnagelvin Hospital have been removed in advance of introducing this ban.

The Trust’s main sites have also been decorated with bright red posters encouraging people to maintain our smokefree sites.

The ban has been widely welcomed by doctors, nurses, patients, visitors and partner organisations. Elaine Way, Trust chief executive, said everything possible was being done  to support staff and patients to successfully quit.

She added: “It is only right and proper that as a health promoting organisation, we lead by example, and make the Western Trust a smoke-free campus. We want to encourage a cultural shift, so it becomes unthinkable that anyone – staff, patients or visitors would smoke on a Western Trust site.”

This is equivalent to 12% of the West’s smoking population accessing such services.

If you want to give up smoking, the Western Trust Stop Smoking Service can give you free advice and support to help you quit – just phone 0800 917 9388. There are drop – in stop smoking clinics based in your local community and you’re four times more likely to quit with our Smokefree service.