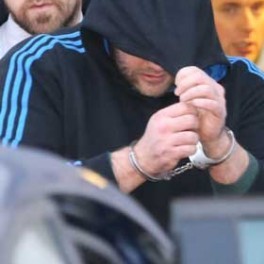 IRISH SOLDIER FROM DERRY APPEARS IN COURT ON EXPLOSIVES CHARGES

A member of the Irish Defence Forces has appeared in court charged with explosives charges.

Mark Cassidy, originally from Derry, was brought to a special sitting of Letterkenny District Court this evening amidst tight security.

Cassidy, with an address at Grianan Vale, Ballyederowen, Burnfoot, faces two charges of possessing explosives at the same address on Monday last.

He is charged with having an explosive substance and also possessing 87 twelve gauge shotgun cartiridges.

Cassidy, who is in his late 20s, appeared wearing a dark tracksuit top, dark trousers and trainers.

Detective Garda Michael Carroll told the court that he arrested him yesterday and put the two charges to Cassidy but the accused made no reply.

Garda Inspector Michael Harrison said he was objecting to bail because of the seriousness of the offences and because Cassidy had no permanent address in the Republic.

Barrister for Cassidy, Peter Nolan, said he was not in a position to apply for bail at the moment.

He said the defendant had rented accommodation but this was now a crime-scene as it was where the alleged incident took place.

He said the defendant was suffering from an illness and is on disability allowance as he is not currently working.

Judge Paul Kelly asked what rank Cassidy was in the Defence Forces and the accused replied from the public gallery that he was a private.

Judge Kelly remanded Cassidy in custody until the next sitting of Letterkenny District Court on Monday next for directions in the case.

Barrister Peter Nolan said he will hopefully be in a position to apply for bail then.

Meanwhile, another soldier also arrested during the same operation is still being questioned at Letterkenny Garda Station.