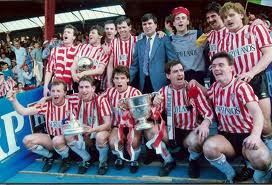 Derry City have made a limited number of tickets available for the upcoming dinner to celebrate the 25th anniversary of the club’s historic “Treble” win. The gala event, being held in the City Hotel on 28 February next, is expected to be attended by players who captured the FAI Premiership, FAI Cup and League Cup in the 1988-89 season.

Republic of Ireland manager Martin O’Neill and Football Association of Ireland chief executive John Delaney are due to attend the black-tie event.

A large number of tickets, priced at £60 per person, have already been snapped up local businesses and the “football community,” but the club has reserved a number of tickets to allow fans to attend the event which includes a four-course dinner as well as pre and post dinner entertainment.

Sean Barrett, Derry CIty chief executive, said winning the “Treble” was “something rather spectacular” and an achievement the club was determined to pun on a “fitting event” to mark the remarkable achievement.

He revealed due to the high demand for tickets, a ballot was to be held for fans with priority being given to season ticket holders. He said: “As a large number of the places available have already been snapped up by the local business and football community , we have decided to reserve the remaining places to cater solely for any further demand from Derry City fans.

“The club are now inviting supporters to apply for places in a ballot –in which priority will be given to season ticket holders- by contacting the club office with their details before Friday, 14 February.”

A deposit of £15 per application is required in order to secure a place in the ballot which  will be held this Saturday with successful candidates being notified shortly afterwards.

Mr Barrett added: “Please note that if you wish to attend with a partner/spouse/friend you may apply for up to a maximum of 2 seats per application, with each successful application drawn receiving the allocation of seats applied for. ”