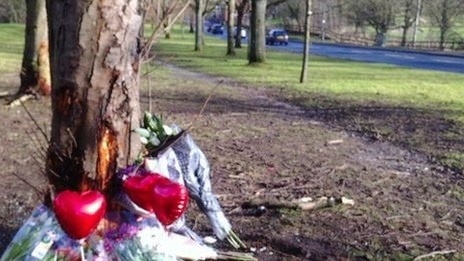 TRIBUTES TO DERRY SOLDIER KILLED IN CAR CRASH IN ENGLAND

One of two soldiers killed in a car crash in England at the weekend has been named as 23-year-old Mark McKeen from Derry. 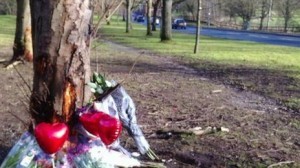 Floral tributes at the scene of Saturday’s crash.

The 23-year-old,  described as a “first-class soldier,” died when the black Seat Ibiza he and a comrade – Private Codie Richardson (20), from Stockton-on-Tees – were travelling in left the road and collided with a tree at around 8.00pm on Saturday near Catterick Golf Club close their Royal Dragoon Guards barracks in North Yorkshire.

The former Lisneal College pupil, from the Waterside, died at the scene while Trooper Richardson died later in hospital.

Deputy Mayor of Derry, Alderman Gary Middleton, who went to school with Trooper McKeen described him as a “bubbly character.”

Ald Middleton said: “This is devastating news. I went to school with him and served in the army cadets with him, too.

“He was a bubbly character, outgoing and very keen. He was always very focused on what he was doing. He will be missed.”

Major Pearce-Gould, Officer Commanding B (The Black Horse) Squadron, said Trooper McKeen was a “well-rounded individual” and a “first-class soldier” who had served two terms in Afghanistan.

He added: “His loss will be keenly felt by all who knew him. He was a popular and engaging member of the regiment.

“He served with great courage and dedication on two difficult and dangerous tours of Afghanistan.

“His untimely loss is a terrible tragedy but his memory will always be cherished by The Royal Dragoon Guards and those of us fortunate enough to have known him. Our thoughts and prayers are with his family.”

It is the second tragedy to strike Trooper Richardson’s family. Her father, Mark (39), died after he was stabbed by an intruder at their then home in Stockton in 2002.