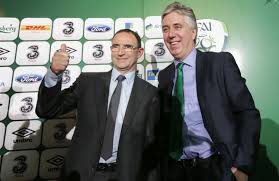 Republic of Ireland manager Martin O’Neill will the special guest at a gala dinner being held by Derry City to celebrate the 25th anniversary of the club winning the League of Ireland “treble.” It will be O’Neill’s first visit to the city since taking over the job from Italian Giovanni Trapattoni.

John Delaney, chief executive of the Football Association of Ireland (FAI) will also attend the black-tie event taking place in the City Hotel on Friday 28 February.

1989 is a year that still lives long in the memory of Derry City fans.

Under the guidance of the Derry man Jim McLaughlin, City carried themselves with a swagger, winning the first of the three trophies – the League Cup – with a 4-0 hammering of Dundalk.

The league title was won on the last game of the season with a 2-0 comfortable win over Bray Wanderers, courtesy of two goals from midfielder Paul Doolin.

The historic treble was secured when former Northern Ireland international Felix Healy scored the only goal of the FAI Cup final replay against Cork City at Dalymount Park in Dublin, the two sides having fought out a 0-0 draw at the same venue the previous week.

As a result of winning the league title, the following season Derry went on to play Benfica, managed then by the relatively unknown Sven Goran Eriksson, in the European Cup.

The first leg tie was remembered by Derry fans this week by the death of  the legendary Eusabio,  who was among the Portuguese party that travelled to Brandywell.

Meanwhile, tickets for next month’s celebratory dinner are due to go on sale soon.