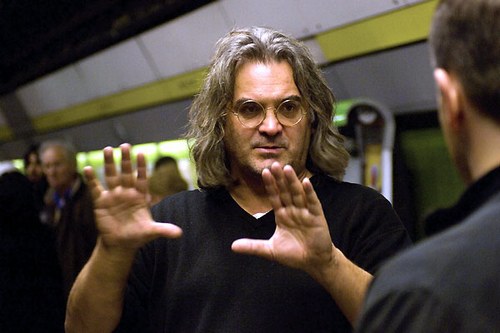 One of Hollywood’s most influential directors Paul Greengrass is to devote an entire day of his busy schedule to attend three separate events in Derry next week. Greengrass, whose films include “Bloody Sunday,” will be in the city on Thursday next, 14 November, for a question and answer session at a screening at 10.00am in the Brunswick Omniplex of his smash-hit “Captain Phillips,” starring Tom Hanks.

He will then attend a free screening at 3.30pm in the Rath Mor Centre of “Bloody Sunday,” his seminal documentary-style film about the momentous events of January 1972.

He will end his day-long itinerary in conversation with the University of Ulster’s Professor Martin McCloone at the Foyle Theatre at the North West Regional College from 7.00pm when he will discuss both “Bloody Sunday” and “Captain Phillips” as well as his other work including the hugely successful and influential “Bourne” films and his acclaimed “United 93.”

The three events being staged as part of the Derry’s City of Culture “Cinema City” festival.

Greengrass began his career as a journalist on Granada Television’s “World in Action” programme which he put to good use on his early documentary style films such as “Bloody Sunday” in which he extensively used hand-held cameras which perfectly suited the subject matter.

He brought the same style to “United 93,” retelling the story in real-time of the doomed American Airlines flight hijacked on September 11 2001 which crashed when the passengers confronted the hijackers and which brought him to international acclaim.

The British director was, for some, an odd choice to take on hi-octane thrillers “The Bourne Identity” and “The Bourne Supremacy,” but they were smash hits around the world and with his latest film “Captain Phillips,” which tells the true story of a US cargo ship hijacked by Somali pirates, he has brought both styles of film-making together.

“By the time I’d done Bloody Sunday I felt I had reached the end of a chapter,” he says. “I wanted to find something new, something different and then to my amazement Bloody Sunday won lots of theatrical prizes and to my even greater amazement I had the opportunity to make a film in Hollywood.”

Martin Melarkey, cultural programmer of Cinema City, said: “Paul Greengrass is perhaps one of the most exciting directors working in film today and it is a great coup for us to be able to welcome him to Derry.

“His work is always interesting and certainly thought-provoking. It will be a treat to hear what he has to say on films like Bloody Sunday in the city in which it had such a profound impact.”

Admission to “Captain Phillips” and Q&A with director Paul Greengrass at Brunswick Omniplex is £4.50 – £2.50 school bookings.

Entry to “Bloody Sunday” with director Paul Greengrass at The Hive, Rath Mor Centre is free.

Tickets can be booked online at www.cinema-city.co.