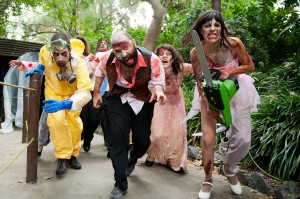 PortAventura has today launched this year’s Halloween season with some important new developments.

The highlight is the creation of the [REC] Experience, an attraction/show that brings to life some of the best moments of the terror series’ three movies. The new attraction was presented today for the first time by Julio Fernández (President of Filmax), Fernando Aldecoa (CEO of PortAventura), Gianfranco Bollini (Shows Director of PortAventura), and Jaume Balagueró, co-director de [REC], [REC]2 and sole director of the fourth and final episode in the series, [REC]4 APOCALYPSE.

The Halloween season will run from 28th September to 17th November 2013. During this time, lovers of mystery and terror will be able to enjoy a themed spectacular with pumpkins, scarecrows and bats. Scary characters such as the Addams Family, the Mummy, and Dracula will parade through different areas of the park while monstrous creatures will lurk in the darkness of the Polynesian jungle walks, ready to freeze the blood of visitors eager to have fun and enjoy being frightened.

The [REC] Experience is inspired by the hit movie series [REC], produced by Julio Fernández for Filmax and directed by Jaume Balagueró and Paco Plaza. [REC] was a completely new experience for the public and a turning point in the history of Spain.

The [REC] franchise is already acclaimed as a classic of the genre, a must-have in the film library of any lover of terror, and is the only Spanish horror franchise to have achieved international success. To date, three films in the series have been released: [REC] and [REC]2, co-directed by Jaume Balagueró and Paco Plaza, and [REC]3 GENESIS, directed by Plaza alone. In October 2014 the final chapter will arrive in cinemas: [REC]4 APOCALIPSIS. Jaume Balagueró will be behind the camera to bring an end to one of the scariest stories ever told.

For 15 long minutes along its 350m walk, the [REC] Experience recreates some of the most memorable moments of the three films that make up the series so far. A team of 40 actors will bring to life some of the best-known characters from the [REC] universe… and some of the terrifying infected. This walk also features a new development: the incorporation of video and cinema screens along the route that will show images from the films to deepen visitors’ immersion in what’s happening. 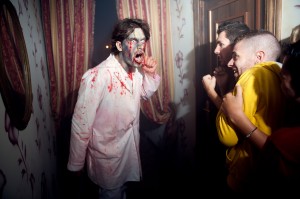 The [REC] experience will only be open to visitors at weekends during the Halloween season, an all-consuming experience that doesn’t allow a moment’s respite from the action. “For us it was a real challenge to capture the best scenes of the [REC] series in this very special walk. We’re sure that the end result offers fans of horror and Halloween a truly terrifying experience,” said Gianfranco Bollini, Shows Director of PortAventura, during the presentation of the new season.

Those who feel like screaming can also enter the legendary “Selva del miedo (Jungle of fear)”, a terrifying walk in the Polynesia area inhabited by monstrous beings, where mists and darkness obscure everything and turn the journey into a blood-chilling experience. Alternatively, visitors can brave “Horror in Penitence”, a macabre and inhospitable maze in the Far West with a gloomy and creepy atmosphere from which it is difficult to escape.

Halloween 2013 also brings new terror shows that are fun for all ages. The Gran Teatro Imperial is decked out to host “Rock Symphony-Mystery”, an impressive mystery tale with dancers and acrobats in a gothic atmosphere to summon the souls from the beyond. The most daring may also enjoy the terrifying menu of “Vampires: Dinner Show”, in the legendary Far West Saloon, where dancers, actors, acrobats, magicians and singers sow panic and occasional laughter among the guests. Finally, the Mexican La Cantina will host “La Gran Fiesta (The big party)”, in which a cast of dancers and Mexicans perform the country’s traditional repertoire.

This Halloween will also be a chance for the characters of SésamoAventura to welcome a new arrival, the charismatic Count Von Count, who is coming to stay at PortAventura to delight young visitors. The Count will join Elmo, Grover, Bert, Ernie, and his Sesame Street friends to bring fun and delight to all the family with the “Es Halloween en SésamoAventura (It’s Halloween in SésamoAventura)” show.

In the words of Fernando Aldecoa, CEO of PortAventura, “Like every year, we want both young and old to enjoy the mysteries and the characters of Halloween. That’s why this season there are new attractions, new characters and updated shows to give everyone an unforgettable experience.”

The Mediterrània area will again host the majority of the night-time programme, highlight of which is the “Halloween Parade”, which will bring an end to every day’s events. The parade’s participants will include a colourful collection of vehicles including an old horse-drawn hearse, a cute pumpkin, a giant skeleton riding a bicycle and a huge demon.

“Horror en el lago (Horror at the lake)” will again turn the Mediterrània lake into the stage for a spectacular display of fire, fireworks and music from beyond the grave, starring a monstrous dragon and the sinister Death. Visitors this year will be able to thrill to the sight of dark skeletons mounted on diabolical, water-jet powered fly-boards, skimming over the waters and reaching heights of up to 12 metres.

Filmax Entertainment is one of Spain’s most important audiovisual companies. Its president, Julio Fernández, has produced and distributed more than 250 films. Headquartered in Barcelona and with offices in Madrid and Santiago de Compostela, Filmax is perfectly positioned to respond fully to the demands of the Spanish and international entertainment markets. [REC], by Jaume Balagueró and Paco Plaza; Transsiberian, by Brad Anderson; Perfume, by Tom Tykwer; Tapas, by Jose Corbacho and Juan Cruz; Snowflake, by Andrés G. Schaer; and the television series, Polseres Vermelles (Red Bracelets) are just some of the successes that the company has produced.

PortAventura: European Destination Resort is a themed resort located between the towns of Vila-seca and Salou. It opened in 1995 as Spain’s first theme park, with the goal of offering a journey around the world in a single day. After meeting great initial success, and thanks to the opening of its hotels and Costa Caribe Aquatic Park, PortAventura has become a tourist destination in itself.

All of this, together with its excellent locatiThe six themed areas of the park – Mediterrània, Far West, México, China, Polynesia and SésamoAventura – currently occupy 119 hectares and boast more than 30 rides, 15 daily shows, 75 restaurants and food outlets, and 27 handicrafts and gift shops.