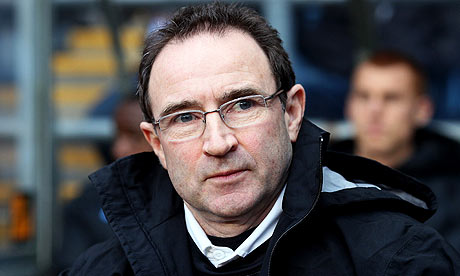 Martin O’Neill, the hot favourite to succeed Giovanni Trapattoni as the Republic of Ireland’s next international football manager, has broken his silence on the matter. However, unlike two others tipped for the post he did not rule out the possibility of  applying for the job or taking it if it was offered to him.

The former St Columb’s College pupil said he had not been contacted by anyone at the Football Association of Ireland (FAI).

Two contenders for the post vacated by the 74-year-old Italian have moved quickly to distance themselves from the position.

Former Republic international, Chris Houghton, now manager at English Premiership club Norwich City and Leeds United boss Brian McDermott have distanced themselves from the job, both stating they are “happy” at their respective clubs.

Given the fact O’Neill is a free agent and that McCarthy’s appointment would require a compensation payment to Ipswich would appear to rule out the former boss.

While Keane would appear to be a contender his appointment is unlikely given his spat with the FAI during the 2006 World Cup in Saipan.

Meanwhile, FAI chief executive of the FAI was ruling nobody out or anybody in, stating there was a possibility the could could once again appoint another continental manager.

Delaney said: “In terms of the next man all we want is the best manager. It does not matter whether he is Irish, English, continental or whatever.”

The FAI chief executive said it was “not a must” to have a manager appointed before the next month’s World Cup qualifiers as the first Euro 2016 qualifiers don’t take place until September next year.

He added: “We must be confidential as we can. If you remember last time, Trapattoni came out of nowhere and there six or seven different favourites through the whole process.”