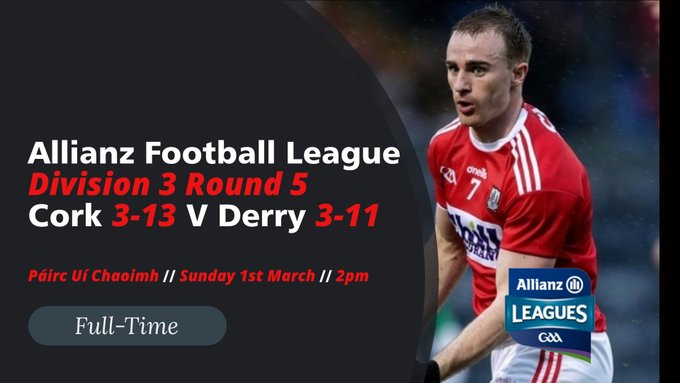 THIS Division 3 encounter game went to the home side despite a late Derry rally which meant Cork had to sweat up until the final whistle.

Backed by a stiff wind, Cork attacked the Blackrock End in the first half. Derry dropped back in numbers from the off, defending in depth.

When Gore added a point soon afterwards, it was 1-4 to 0-1 on 20 minutes, but Powter needed to take a shot off the line from Derry’s Danny Tallon on 22 minutes: Odhran Lynch pointed the resulting 45 and Emmet Bradley hit a good point from the kick-out – 1-4 to 0-3.

Sub Cathail O’Mahony, on for the injured Connolly, had a good Cork point on 32 minutes. Carius McWilliams late free made it 1-5 to 0-4 at the break, but a melee broke out at the short whistle involving most of the players before they made the dressing-rooms.

On the resumption, Cork almost had a goal from Brian Hartnett, but Padraig McGrogan took the ball off the line: O’Mahony added a free soon afterwards and Padraig Cassidy responded in kind.

O’Mahony and O’Rourke added Cork points, then Powter cut through to place O’Rourke for a close-in goal: 2-8 to 0-5 on 45 minutes and a long way back for Derry.

Cork kept Derry at arm’s length for the rest of the game, though Niall Loughlin’s first-time finish to the net gave the visitors hope, Cork swept downfield for another O’Rourke goal: 3-11 to 1-8.

Emmett Bradley and sub Patrick Kearney hit late goals for Derry, making injury-time nervy for Cork, particularly when Ian Maguire was black-carded, but they held out.