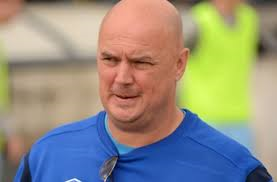 Institute deserved to take something from the title challengers Portadown but were undone deep into stoppage-time by a wonderful strike from Gault.

Institute had three glorious chances to win the game late on but a combination of superb goalkeeping from Portadown goalkeeper Miskelly and indecisive finishing cost Paul Kee’s side.

Institute got off to a terrible start when they conceded after just 90 seconds.

A long throw-in wasn’t dealt with properly and Sean Mackle was on hand to rifle past the despairing Marty Gallagher.

Mark Forker got in behind the Portadown defence and he squared it across the box, but Gary Breen was on hand to toe poke it away as Cormac Burke looked set to tap it in.

Aaron Walsh almost scored a stunning goal on the stroke of half-time but his effort flashed wide of the post.

However, two minutes after the re-start Institute were level thanks to a superb strike from Stephen Curry.

His initial shot was blocked, but his second was unstoppable as he rifled home from twenty-five yards out.

Institute then soaked up a huge amount of pressure but looked dangerous on the counter-attack and could’ve scored on three separate occasions.

Just when it looked like Institute would secure a vital point, up stepped Gault to break their hearts.

Institute have a break from league action this week as they face Loughgall in the Irish Cup.